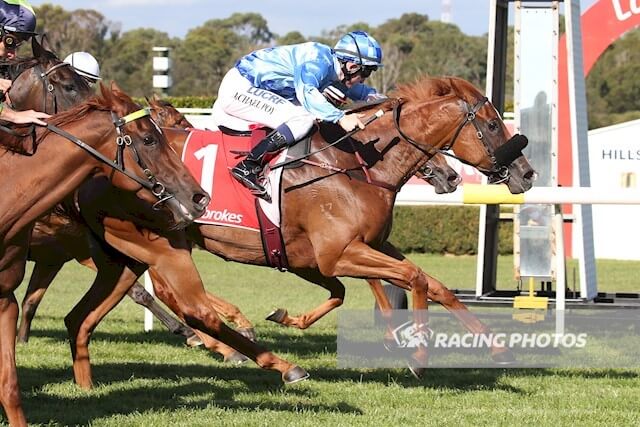 Speedy three-year-old filly LAKE DISTRICT GIRL (3yf Not A Single Doubt x Lake Mountain by Monashee Mountain) stepped up from a Morphettville Maiden to win at Sandown in Melbourne on Wednesday, February 20.

Despite coming from a wide gate, Lake District Girl, the $2.25 favourite, ridden by apprentice Michael Poy, had enough pace to cross and lead, then hang on score a photo-finish win in the Ladbrokes Cash In Benchmark 64 Handicap (1000m) defeating Tatiara ($5.50) with Ray’s Dream ($9.50), a long neck away third.
But the filly had to withstand a protest before being able to claim victory.

As she got tired late, Lake District Girl tended to drift towards the centre of the course and connections of the runner-up felt their runner had been impeded but stewards ruled it had not affected the result.

The victory gave McEvoy a race-to-race double at Sandown having won the previous event with Rockarral. It brought up a two-state treble having also won at Strathalbyn with Now And Forever.

“She is a bit more furnished now,” Shepherdson said.
“She got a bit tired late so there is more to come with her fitness.
“We’ve always thought she was a stakes-class filly but now she has gained confidence in lower grades.
“She will gain a lot from the wins and I’m sure Tony will find a nice three-year-old race for her.”

Jockey Michael Poy thought Lake District Girl had been the class horse of the race.
“The way she begun I decided to take luck out of the equation by letting her slide across to lead.
“She led easy enough and I had still had plenty left at the 300 metre mark but she got weary legs late.”

The filly now has two wins and a third from just five starts.