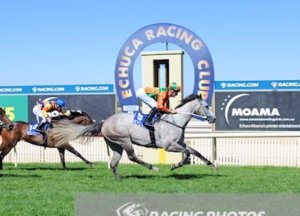 Waltonia returned to the races for her first up assignment over 1000m at Echuca, looking to leave 2019 on a high.

A week and a half earlier, she won a Ballarat jump out with ease and the Moonee Valley placegetter looked to be back to her best. As a result, she went into the race at Echuca as a heavily backed $2.25 favourite.

With Jordan Childs aboard for the first time, Waltonia was able to take a sit behind the hot speed and she was given the run of the race. As they turned for home the gaps opened up and Jordan was able to steer Waltonia into the clear. Half way up the straight Waltonia hit the front and eventually kicked away inside the final 100m to go on and record a fairly comfortable win.

The grey Bel Esprit mare, who carries the famous Lauriston Thoroughbred Farm silks, has now won 3 races from 13 career starts and she looks ready to return to the metropolitan circuits. She has been competitive in Saturday class races previously and a win in town would certainly add to her value as a broodmare following her racing career.

It was a very pleasing win for the stable and with some nice horses resuming from breaks in the coming weeks, hopefully there will be plenty of winners to follow.