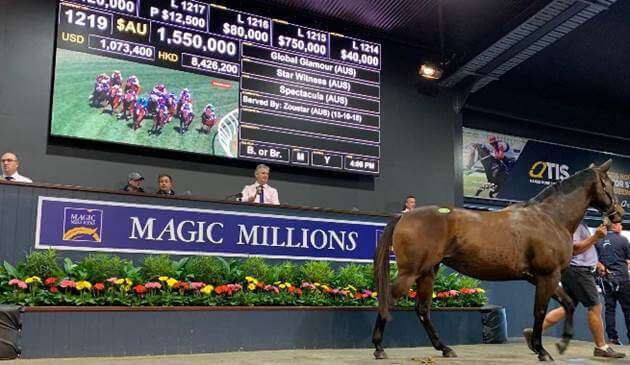 Story by Brad Bishop, Racing.com
James O’Brien hasn’t had any first-hand involvement with Global Glamour for more than four years, but there was no prouder man when she stole the show during Wednesday’s session at the Magic Millions National Broodmare Sale.

The five-year-old product of Star Witness and Spectacula, who was bred at the O’Brien family’s Lauriston Farm in Victoria, became the first seven-figure lot of Day 2 when sold for $1,550,000.
She was purchased by a partnership involving Coolmore’s Tom Magnier, James Bester – who brought together the syndicate of women that raced Global Glamour – and Gerry Harvey.

“There’s no possible way that I thought she would make that mark when she was born,” O’Brien said of Global Glamour, who O’Brien sold for $65,000 at the 2015 Magic Millions Gold Coast Yearling Sale. “Just seeing her racing career evolve, we’ve just been so proud to see that result. She is the best filly that we’ve produced. She did an amazing job on the racetrack.”

Global Glamour, who was prepared for this week’s sale by Widden Stud, lived up to her billing as the banner lot of the second day of selling with her opening bid of $1 million ensuring she’d set a new mark for the highest-priced lot of Day 2.

Magnier was happy to get the mare who is in-foal to Zoustar, but will be covered by high-profile Coolmore recruit Justify this coming breeding season.
“She’s a lot of quality, she was obviously an amazing race filly,” Magnier said.“All the best judges were on her, so we’re just happy that we got her. We’ll send her to Justify, that’s where Gerry wants to go.”

The last of Global Glamour’s 19 starts was last September in the Group 3 How Now Stakes at Caulfield, the venue of her second Group 1 in eight days during the spring of 2016.
After winning the Flight Stakes at Randwick, the Gai Waterhouse and Adrian Bott-trained filly headed south to win the Thousand Guineas.

That race has had a profound impact on this week’s sale. Runner-up I Am Star was offered for sale on Day 1 but passed in for $1.4 million, while third placegetter Whispering Brook sold for $1.1m on Tuesday.Missrock, the seventh placegetter, holds top billing as the highest-priced lot of the sale at the halfway mark after changing hands for $2.3m on Day 1.Fromparis Withlove, who finished second-last in the Guineas, was also sold on Day 2, changing hands for $320,000.